A new peer-reviewed study using improved land elevation data shows that much larger populations are at risk from rising seas and coastal floods.

WHAT YOU NEED TO KNOW

Projecting future coastal flood threats involves projecting future sea levels and adding tides and storm surge on top of those. The resulting water levels can then be compared against coastal area topography (land elevations). Although high-accuracy lidar-derived land elevation data are freely available in a limited number of countries, including the United States, Australia, and parts of western Europe, it is lacking or unavailable for most nations. Absent lidar data, most assessments of coastal flood risks have used elevation data from NASA’s Shuttle Radar Topography Mission (SRTM).

SRTM measures the elevation of earth objects closest to the sky, including rooftops and treetops where they get in the way of the ground.  As a result, SRTM data often overestimate terrain elevation, particularly in densely vegetated and highly developed urban areas.

The CoastalDEM-based analysis presented here employs localized sea level rise projections from Kopp et al. (2014), which closely align with those in the IPCC Special Report on the Ocean and Cryosphere (SROCC) released in September 2019. 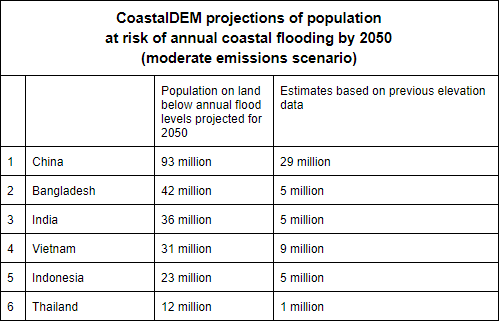 If emissions rise unchecked and polar ice sheets respond quickly to warming—i.e. a plausible worst-case scenario—the study finds that across those six nations, land where 250 million people currently live will be below the permanent high tide line by 2100, about four times more than assessments based on SRTM (60 million). 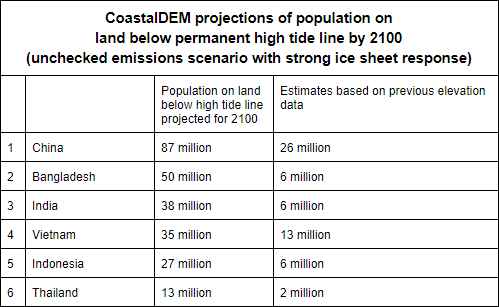 CoastalDEM mapping tools are available at Climate Central. The peer-reviewed study details findings from individual assessments of 135 countries across multiple climate scenarios in future decades. Climate Central has used this data to introduce the most advanced interactive maps accessible to the public, enabling neighborhood-level exploration and screening of potential threats in areas around the world, based on peer-reviewed science.

IMPORTANT NOTE FOR U.S. COASTLINES: To look at coastal areas at risk of sea level rise, use our Surging Seas interactive risk zone maps based on more accurate lidar-derived data.

These threats of rising seas and coastal flooding may seem far away—in distance and in time—to many of us here in the United States. But the U.S. is home to a sizable Asian American population, with immigrants from China, India and Vietnam making up large communities in cities across the country, including Los Angeles, New York, and Houston. These Americans are likely to be especially concerned about the threats to family and friends remaining in Asia, where sea level rise could lead to migration and political instability.

Evidence shows that immigrant groups around the globe mobilize to provide support for their homeland in the aftermath of a disaster, such as a tsunami or earthquake. Following floods and hurricanes in Haiti, relief and recovery efforts were supported by the Haitian diaspora in the U.S., including professional and faith-based organizations organizing aid and volunteer rebuilding efforts.

A 2018 World Bank report projected that the impacts of climate change, including sea level rise and extreme storm events, could eventually uproot millions of people around the world. While the slow onset impacts of climate change are expected to lead to internal migration, patterns and magnitude are difficult to predict because of the varieties of risks faced (drought, flooding, etc.) and of the capacity of countries to plan for them. A 2014 study by the Asian Development Bank predicted that South Asian countries could lose an equivalent 1.8% of their annual gross domestic product (GDP) by 2050. As countries’ economies or living conditions decline due to disastrous weather events or sea level rise, migration is likely to ensue, both internally and externally, and can be viewed as one form of adaptation to climate change. None of this research had the benefit of using CoastalDEM, so coastal threats may be underestimated.

Predicting future climate migration patterns is difficult. IPCC research contends that while those who are most vulnerable to climate change are not necessarily the ones more likely to migrate, climate migrants who cannot relocate within their own country may emigrate to locations in which they have an existing cultural or ethnic support network.

More than 20 million Asian Americans currently live in the United States, and are expected to make up the largest immigrant population by 2050, according to Pew Research Center.  A number of states have significant U.S. Asian populations, including Hawaii (56%), California (16%), New Jersey (10%), Nevada (10%) and Washington (10%). And a number of U.S. metropolitan areas are host to large ethnic and cultural communities from the six Asian countries with land at most risk of chronic inundation. 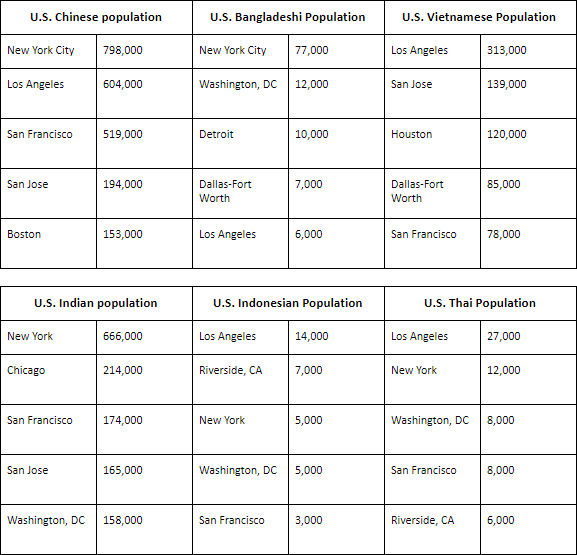 The Environmental Migration Portal is an information-sharing platform on human mobility due to climate change and environmental catastrophe, supported by the International Organization for Migration (IOM).

more than twice as fast–3.6 mm per year–and accelerating.

CoastalDEM® is a new elevation dataset developed by Climate Central using sophisticated machine learning techniques that correct for systematic errors in the principal elevation dataset used until now for international assessment of coastal flood risks. The new dataset is substantially more accurate than SRTM, particularly in densely populated areas—precisely those places where the most people and structures are vulnerable to rising seas. See CoastalDEM for more details on methodology and accessing data.

On September 25, 2019, the IPCC will release its Special Report on the Ocean and Cryosphere in a Changing Climate. Here are some tools to cover this work of more than 100 scientists.

Ocean at the Door

Sea level rise will threaten hundreds of thousands of homes in the coming decades — and many communities have built a striking number of new homes in the future flood zone.