As sea levels rise, coastal flooding is happening more often and in more places at once. 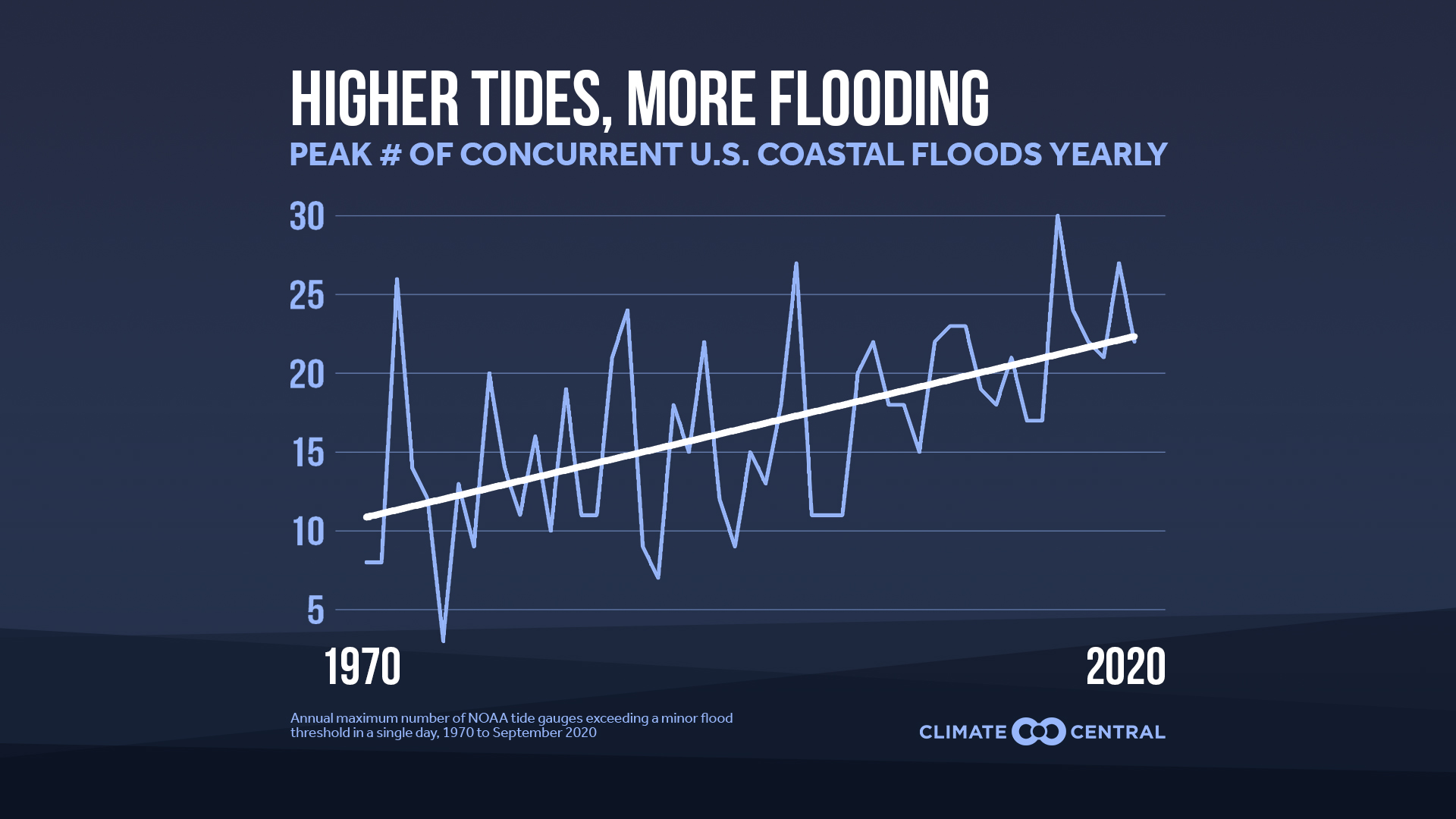 National Risk from a 2-foot Flood Above High Tide Line

States Risk from a 2-foot Flood Above High Tide Line

New analysis shows that coastal flooding is not only happening more often, it is striking more places at once. Analyzing hundreds of hourly tide gauge datasets from NOAA, the oldest of which dates back before 1950, Climate Central scientists found an increasing trend in the annual maximum number of tide gauges concurrently measuring flood-stage water levels. Further, the analysis found that September 22nd set a September monthly record for the number of concurrent coastal floods, with flood-stage water levels recorded at 84 currently active coastal tide gauges around the U.S.

This week, the National Oceanic and Atmospheric Administration (NOAA) is predicting higher than normal or “King” tides, raising the risk of coastal flooding. These king tides are the result of the confluence of warm, expanding ocean waters during the fall, seasonal changes in winds and currents, and a perigean spring tide (the higher-than-normal high tides and lower-than-normal low tides that occur when the moon is at the closest point to the Earth in its orbit and there is a full or new moon).

King tides do not always cause coastal flooding, but they raise the risk—and sea level rise elevates the risk even more. The combination of higher than normal tides and sea level rise means that several locations along the West, Northeast, and Southeast coasts are predicted to exceed the high tide flooding threshold because of tides alone—no storm or rainfall needed.

Sea level rise has made this type of coastal flooding, often referred to as “chronic,” “nuisance,” or “sunny day” flooding, increasingly common. High tide flooding has doubled in frequency since 2000, and could double again, or even triple, by 2030.

Even low levels of flooding can have serious consequences for coastal communities. Climate Central analyzed the threat to people, property, and infrastructure at risk from a two-foot flood above the high tide line, a typical minor flood according to NOAA thresholds. We found that nearly half a million people live on land at risk from a two-foot flood in the United States. About a third of this population is ranked high on the social vulnerability index. This index identifies communities that may need assistance in preparing for or recovering from disasters due to socioeconomic factors like poverty, lack of access to transportation, and crowded housing.

Click below for a CSV file containing data on the population, land, contamination risks, and infrastructure at risk from a 2-foot flood by state.

How do I find when coastal flooding is happening in my area?

Check out NOAA’s Inundation Dashboard and their tide predictions page to find out when floods occur or are forecasted to occur, and plot out weekly, monthly, or annual tide tables.

How is coastal flooding impacting the communities and infrastructure in my state?

Climate Central’s Risk Finder tool allows you explore the populations, properties, and infrastructure at risk at various water levels. And our Coastal Risk Screening Tool allows users to view U.S. and global coastal locations threatened by sea level rise and coastal flooding both now and decades into the future. Pew Charitable Trusts has compiled research on local flood mitigation efforts around the country, and the National Conference of State Legislatures collects resources on state level actions on flood issues.

What is being done about flooding in coastal communities?

Check out the work being done by Coastal Resilience, a public-private partnership effort that includes USGS, NOAA, the Nature Conservancy, and several academic institutions. The Association of State Floodplain Managers (ASFPM) has a number of links to resources and research on its coastal issues page. And Georgetown’s Adaptation Clearinghouse has a coastal section that includes tools, planning guides, funding programs, and other resources.

The SciLine service, 500 Women Scientists or the press offices of local universities may be able to connect you with local scientists who have expertise on the impacts of coastal flooding in your area. The American Association of State Climatologists is a professional scientific organization composed of all 50 state climatologists. The Association of State Floodplain Managers (ASFPM) has 37 state and regional chapters that can discuss local flood events and policies to mitigate current and future losses from flooding.

To calculate the peak number of tide gauges concurrently recording flood-stage water levels, Climate Central first tabulated which stations were flooded on which days since 1950, using minor flood level thresholds from the National Weather Service and National Ocean Service. The total number of stations flooded on each day were then tallied.

To account for the increasing number of tide gauges operating over time and confirm that Sept 22 reflected a true record, Climate Central analyzed three different sets of tide gauges:

Within each of these sets, the number of tide gauges remains constant from its start date (1950, 1970, or 1990) through the present, so that comparisons are standardized across time. 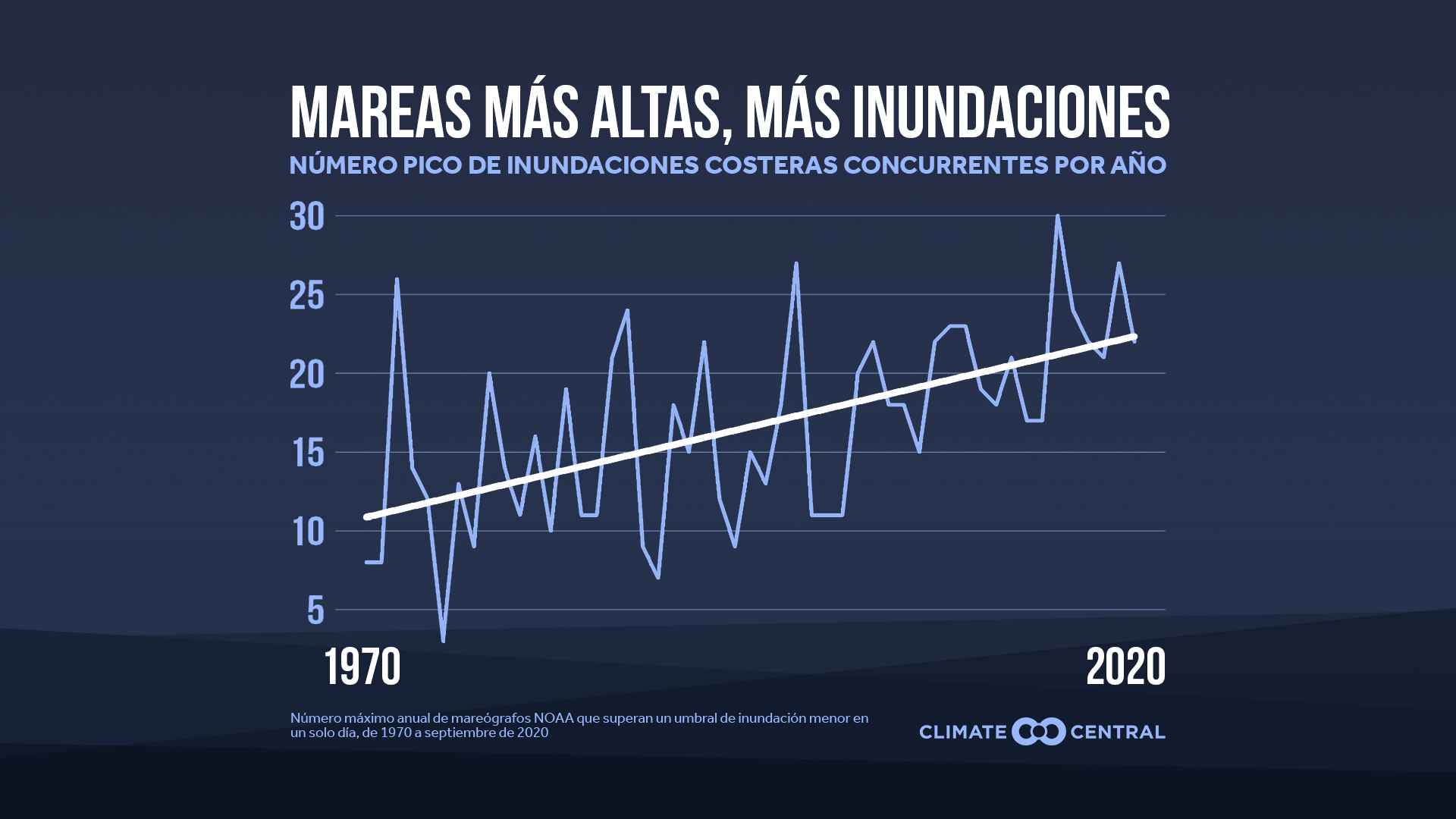 Tidal flooding on the U.S. coast is getting more common, and the number of days with flooding will substantially increase in the coming decades. As the highest astronomical tides of the year approach, the coming weeks will bring a glimpse into a more regularly flooded future for much of the U.S.

A new Climate Central-led analysis looks at the human-caused influence on the number of coastal flood days across the U.S.

Ocean at the Door

Sea level rise will threaten hundreds of thousands of homes in the coming decades — and many communities have built a striking number of new homes in the future flood zone.