In the wake of Hurricane Harvey and in advance of Hurricane Irma, we’ve received many questions about how climate change affects hurricanes, so we wanted to share the latest research and information about what scientists know. Climate change intersects with hurricanes by increasing storm rainfall, intensity, and surge.

A warming atmosphere causes more evaporation, meaning more water is available for precipitation. For every 1°F increase in temperature, the atmosphere can hold around 4% more water vapor, which leads to heavier rain and increases the risk of flooding of rivers and streams. We saw the impact of extreme rainfall during Harvey. Though no research has yet been done to attribute the staggering rainfall totals from this storm to climate change, the downpours are very much in line with heavy precipitation trends.

Warm water provides the fuel for hurricanes. Climate change has heated up ocean waters around the world by 1-3°F over the past century, including in regions where hurricanes develop. That allows hurricanes to grow stronger, potentially increasing their maximum wind speed. One study indicates that hurricanes are intensifying more quickly than 30 years ago. Of course, there are other factors that can limit how powerful a hurricane becomes, such as how the wind changes directions and speed upward through the atmosphere.

Warming oceans and melting land ice have also caused about seven inches of global sea level rise over the past century. This gives storm surge —the coastal flooding that hits suddenly before landfall — a springboard to send floodwaters higher and push further inland than they used to. That in turn can cause more damage to infrastructure and puts additional lives at risk.

September 10 marks the statistical peak of the Atlantic hurricane season.

Ten years ago this week, Hurricane Katrina became one of the worst natural disasters in U.S. history. 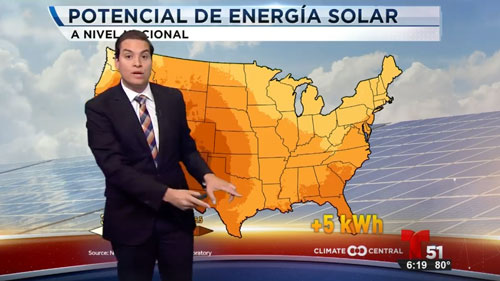