Consecutive days with extreme heat are trending longer and taking a toll on our health — especially in urban areas. 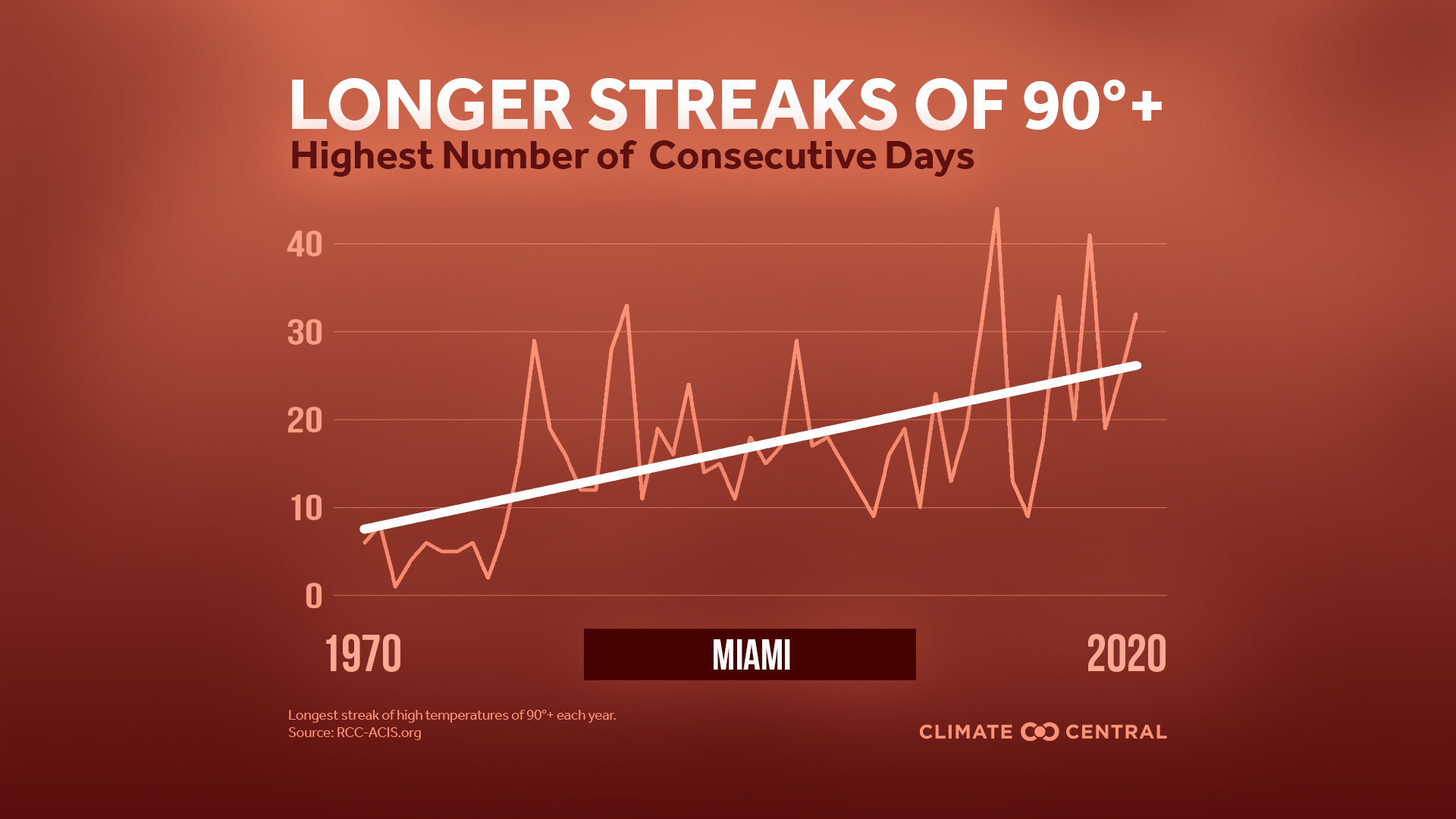 Number of days above local threshold

Much of the country has had a brutal summer, as parts of the West have had their hottest summer on record thus far. Extended periods of relatively lower temperatures have been hard to find — although there are a few pockets in the Northeast and the Southeast which have also been unusually wet.

The Northwest and Upper Midwest have repeatedly seen excessive heat extending for several days in a row this summer. At the end of June, Seattle and Portland, Ore. experienced heat streaks of five days and eight days, respectively, with temperatures above 85°F. Three of those days were over 100°F in both locations. Earlier in June, Minneapolis had nine consecutive days of at least 90°F, peaking at 99°F on June 5.

This prolonged heat has major health consequences, particularly in areas not equipped for such extreme temperatures. During the late June-early July heatwave in Oregon and Washington, more than 200 people died as a result of the heat, and thousands visited emergency rooms in the region with heat-related illnesses.

Heat may be more common in the Southwest but even they are getting longer periods of relatively extreme temperatures, temperatures that lead to severe health consequences. In June, Phoenix had a streak of six days above 115°F, its longest on record. That exceeds the previous record of four days above 115°F, which occurred twice in 2020.

At the same time the West is experiencing extended periods of heat, there also have been long periods without rain. As of August 12, over 95% of the West is in a drought. For 51 days this summer Seattle had no rain, its second longest streak on record.

Our analysis of ‘heat streaks,’ or the number of consecutive hot days, shows that much of the country is experiencing longer stretches of extreme heat compared to fifty years ago. Of the 246 cities analyzed, 77% (190) recorded an increase in their longest heat streak of the year, with 44% (108) reporting an increase of at least two days. Of the ten cities recording the biggest increases, eight were in Texas and all had increases of more than ten days. Two cities outside of Texas, Miami and Lake Charles, La., also had increases of more than ten days in their longest annual heat streak.

Which neighborhoods in your area are more susceptible to excessive heat?
Check out the Future Heat and Vulnerability Map created by the National Integrated Heat Health Information System (NIHHIS) that assigns a vulnerability score to each county across the U.S. based on race, income, and other parameters. Our recent urban heat island report analyzed heat island intensity in U.S. cities, providing an overview of the factors that cause hotter temperatures in developed areas, their impacts, and the solutions.

How is heat affecting public health?
Extreme heat is the deadliest kind of hazardous weather. Early season heat streaks have been found to be more lethal, as most people are not yet acclimated to the heat. You can find data on local hospitalizations from heat through the public health tracking network at the Center for Disease Control (CDC). Summer heat and sun can also contribute to air stagnation, leading to an accumulation of ground-level ozone. Find out more about climate change and air quality from the American Lung Association, and check out their rankings of cleanest cities.

What can be done to protect vulnerable populations?
This EPA guidebook provides guidance for communities on excessive heat response. The CDC has a preparedness manual for extreme heat events. Also check out stories and projects from ISeeChange, and example strategies from the National Integrated Heat Health Information System.

The National Weather Service (NWS) operates 122 local weather forecast offices across the country. Check in with the NWS office in your area to find out about any upcoming heat forecasts, heat advisories and excessive heat warnings. Find out what steps are being taken in your locality to beat the heat — ask local officials about your city’s heat response plan, and see if the EPA database on community responses to urban heat islands includes your area.

The SciLine service, 500 Women Scientists or the press offices of local universities may be able to connect you with local scientists who have expertise on extreme heat in your area. The American Association of State Climatologists is a professional scientific organization composed of all 50 state climatologists.

Data was gathered via the Applied Climate Information System. Climate Central examined the average number of consecutive days a location experienced temperatures at or above a threshold, based on 5 degree intervals, from 75°-110°. The temperature threshold selected for the analysis is the highest temperature that has an annual average streak of 5 or more days since 1970. Climate Central then identified the longest number of consecutive days at or above the selected temperature threshold each year. Change in the number of days is based on linear regression. Climate Central's local analyses include 247 stations. However, for data summaries based on linear trends, only 246 stations are included due to large data gaps in Wheeling, West Virginia.

The stories below are served through a new pilot program from our partners at the Solutions Journalism Network, and were not created by or with Climate Central. 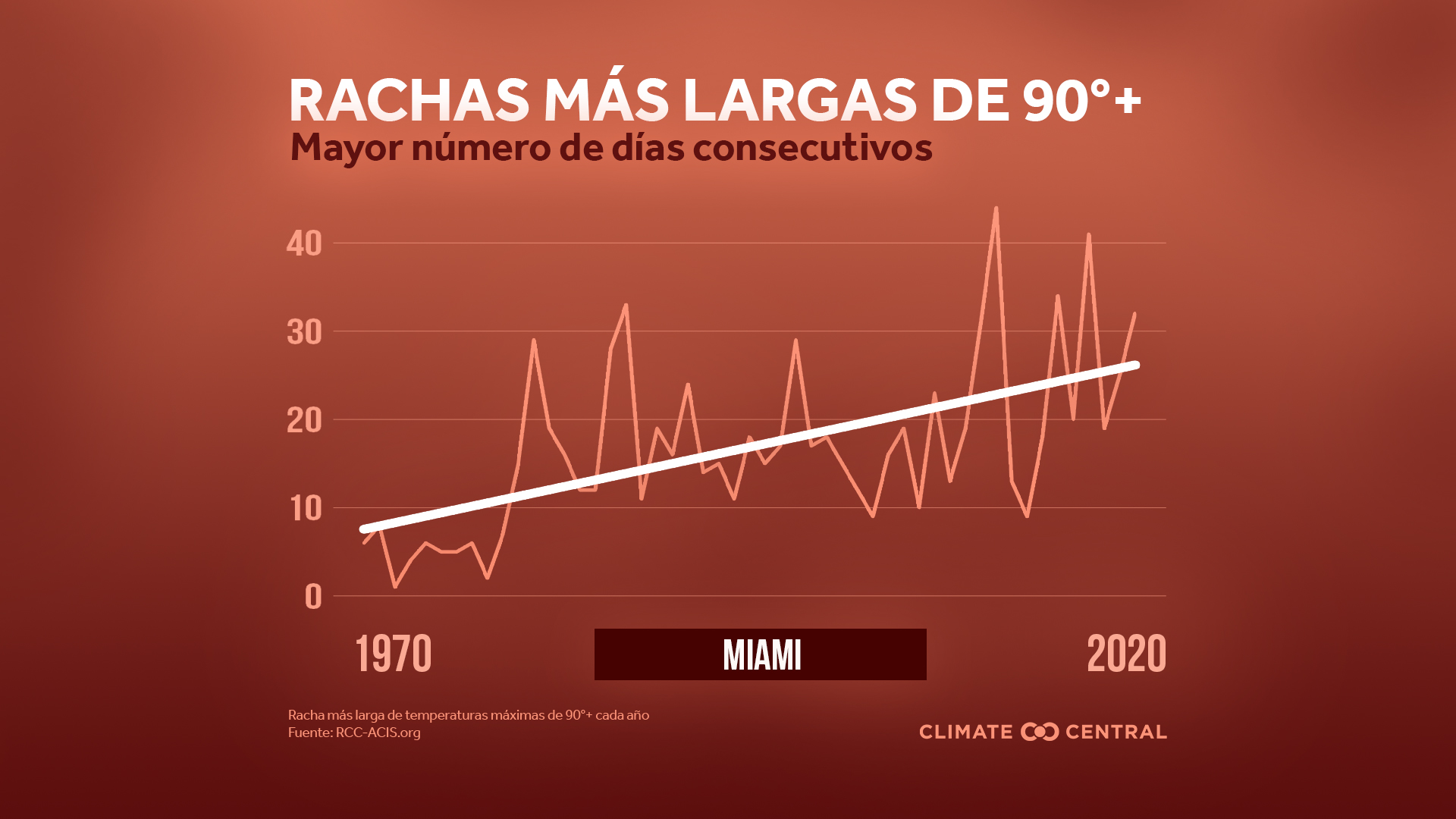 A new Climate Central analysis evaluates the intensity of urban heat islands in cities around the country. Read the report to find out about the factors that cause hotter temperatures in urban areas, the impacts, and the solutions.

As our climate continues to change, we are experiencing more extremely hot days, increasing the risk of heat-related illness and hospitalizations.

Summertime is here and so is our Summer Package. This year's installment includes trends related to summer average and night temperatures as well as the number of days with extreme heat.