Explore summer heat in cities around the globe here >>

WMO and Climate Central are launching a series of climate reports by TV weather presenters from across the world. Presenters from Barcelona, Montreal and Hanoi host the first videos in the series, with reports from Buenos Aires, Cape Town, and Tokyo in the coming weeks.

This week’s Climate Matters visualizes how much warming is expected by the end of the century in the world’s largest cities. The research expands our previous U.S. Shifting Cities temperature analysis to the rest of the world. These shifts in location illustrate how a few degrees of warming during the summer can transport a city to an entirely different temperature zone. That has the potential to alter weather patterns, make extreme heat more common, and affect the health and economic engines that drive those cities.

We project average summer high temperatures at the end of the century and compare them to cities experiencing those same summer temperatures today. For example, summers in London in 2100 will feel more like those in Milan today if greenhouse gas emissions aren’t reduced. Summers in Milan will feel more like current summers in the Egyptian coastal city of Port Said. Moscow will feel like present-day Bucharest, and New Dehli will heat up to present-day Baghdad.

As for Baghdad’s average summer temperatures by the end of the century, they are projected to get so hot that no place on Earth currently matches them. The same is true for several cities in the Middle East, underscoring the reality that climate change is slated to push our world into a state that humans have never experienced.

Average summer high temperatures (Tmax) were calculated using the median of 31 downscaled climate models from the CMIP5 project for two periods: 1996-2015 (current) and 2080-2099 (by 2100). Then, we matched origin cities with destination cities using the closest city within 0.5°C (0.9°F) for both RCP4.5 (moderate emission cuts) and RCP8.5 (emissions as usual). Summer is defined as June, July, August for the northern hemisphere and December, January, February in the southern hemisphere. 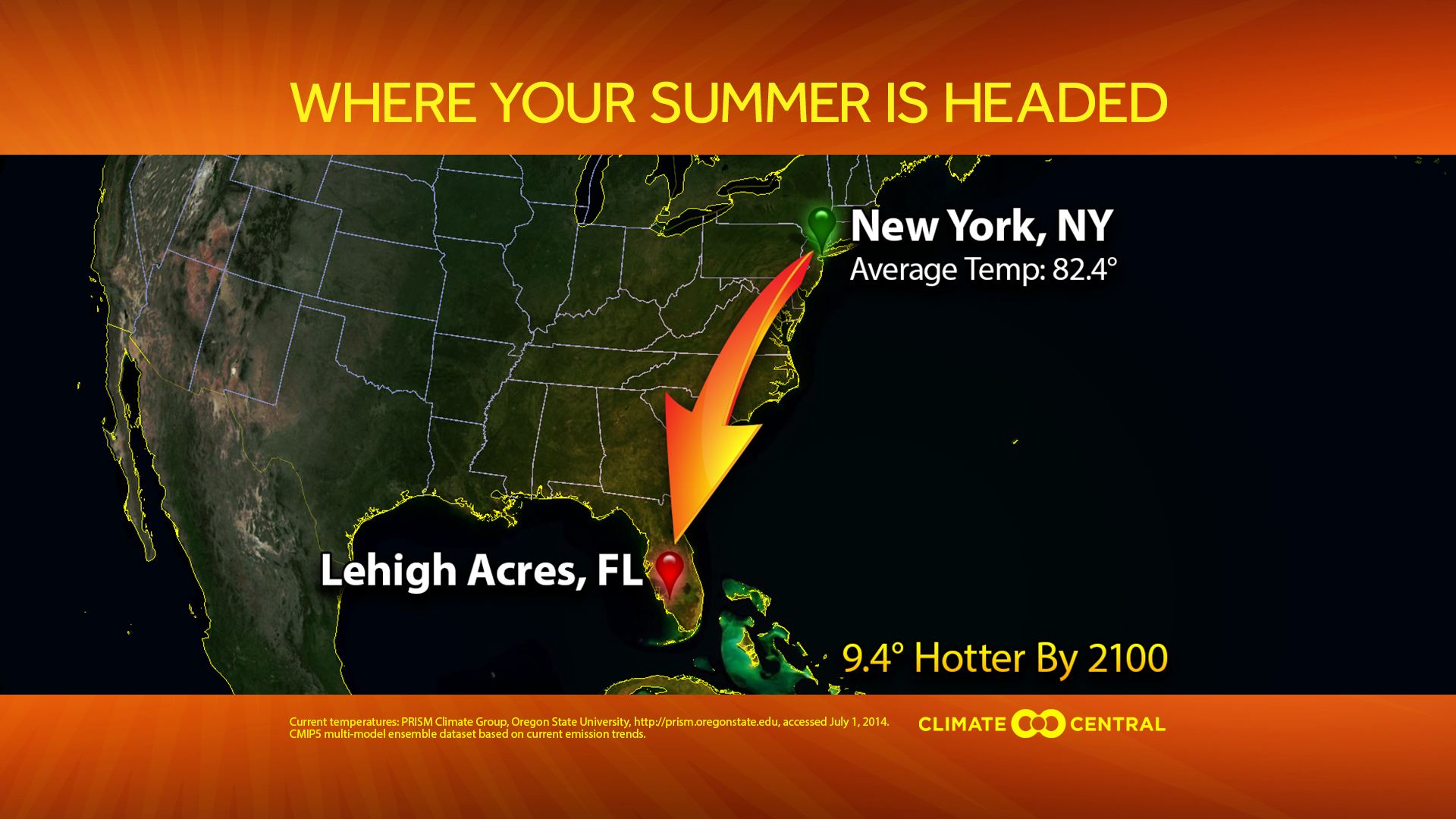 In our original U.S. analysis and interactive, 1,001 Blistering Future Summers, we took late century summer high temperatures and compared them to summer temperatures in cities today. For example, with no mitigation of emissions, Boston summers by 2100 will be similar to current summers in North Miami Beach.

Human-caused climate change made the extremely warm February in the U.S. at least three times more likely than in the past.

Increasing greenhouse gases will increase the number of hot days. Our new interactive shows how the number of days with extreme heat will rise in the second half of the century.

Extreme heat is the clearest indicator of global warming.