The time between billion-dollar disasters—time to help communities across the nation recover—has dropped to just 18 days on average in recent years (2016-2020), according to Climate Central’s new presentation of NOAA/NCEI data. 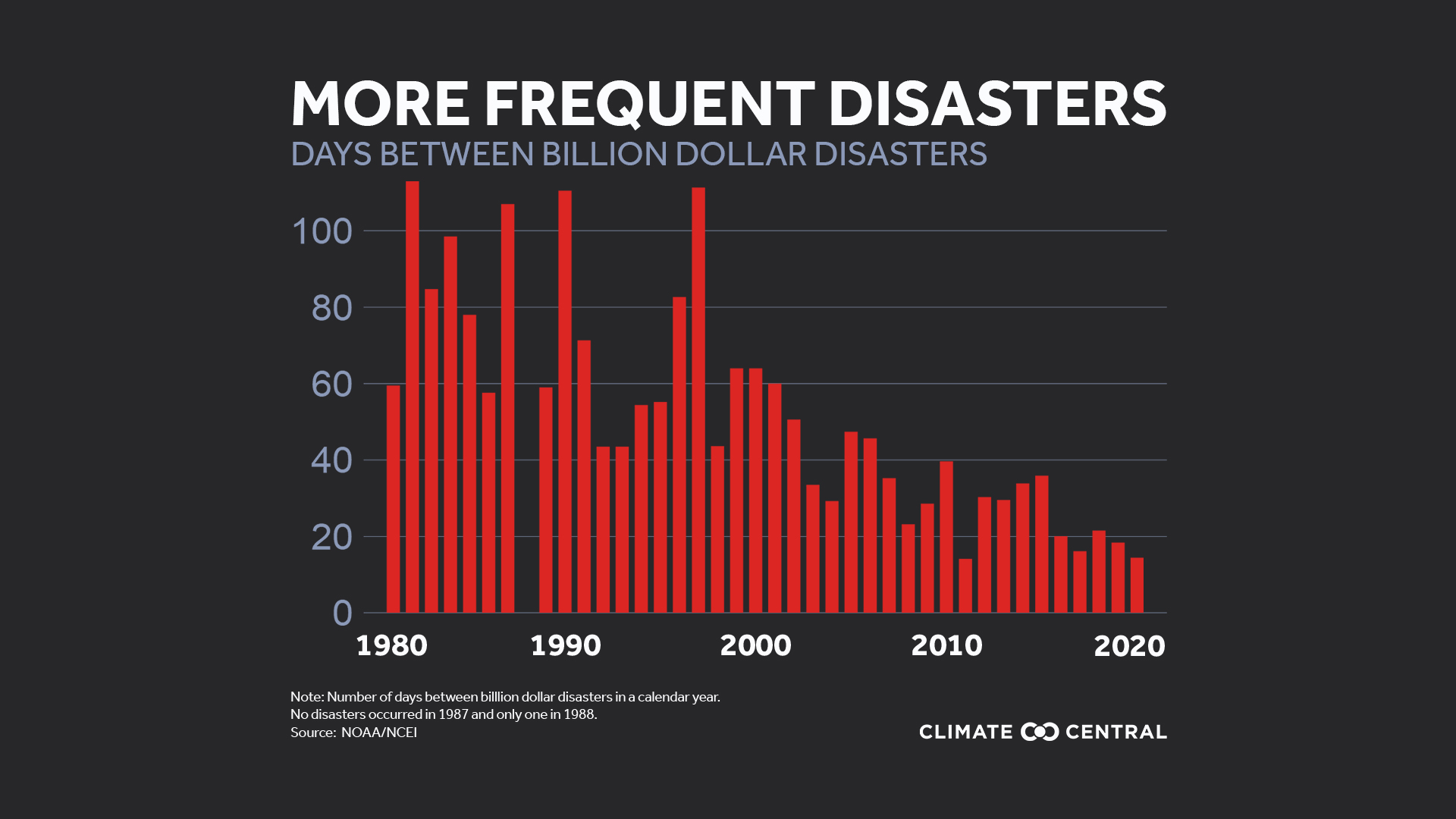 2021 Among Record Holders: The total number of billion-dollar disasters across the U.S. this year is already tracking well above the historical average of 7 events per year since NOAA started tracking in 1980.

More Disasters, More Often: It's not just the total number of disasters—but how often they happen—that strains the resources available for communities to manage risks and recover quickly.

Billion-Dollar Disasters in a Warmer World: According to the latest IPCC report, it is an “established fact” that human-caused greenhouse gas emissions have “led to an increased frequency and/or intensity of some weather and climate extremes since pre-industrial times.”

Not all disasters are billion-dollar disasters.
FEMA maintains a nationwide database of all disaster declarations and public assistance that is searchable by state or zip code. You can also search for current and historical National Flood and Insurance Program (NFIP) policy and claims statistics by state or county.

Is your county or city prepared for these events?
Local officials and state emergency management agencies can provide information about official disaster planning, emergency response, and available state-funded and federal disaster assistance programs. Community leaders, first responders, and disaster relief organizations such as the Red Cross can provide insight on local impacts and needs.

What are the long-term impacts of disasters?
Disaster recovery can take years, and extends far beyond economic losses. Physical and behavioral health impacts can last long after the national news has stopped paying attention. If your region has experienced a disaster in the last five years, check in on the affected community to understand their experience, whether they’ve received assistance, and whether they feel prepared for future disasters. Disasters disproportionately impact individuals living in poverty. This interactive map allows users to search and explore the CDC’s Social Vulnerability Index by county.

Tools for reporting on extreme weather events and disasters near you:
Journalism schools and organizations provide advice for responsibly reporting on disasters, including focusing on safety, data, and cultural sensitivity. The Pulitzer Center on Crisis Reporting provides support for climate change reporting. The Donald W. Reynolds Journalism Institute at the University of Missouri has created a reporters’ guide to climate adaptation. Climate Central’s Extreme Weather Toolkit provides more information about extreme weather and its connection to climate change.

The U.S. Climate Resilience Toolkit includes a searchable map to identify regional and local climate resilience expertise. The SciLine service, 500 Women Scientists or the press offices of local universities may be able to connect you with local scientists who have expertise on extreme events and climate change. Academic resources include: Columbia University’s Initiative on Extreme Weather and Climate; Florida International University Extreme Events Institute; and National Academy of Sciences Resilient America Program. The American Association of State Climatologists is a professional scientific organization composed of all state climatologists.

The time between billion-dollar disasters was calculated by measuring the time between the start date of each disaster as recorded by NOAA/NCEI. The difference in days was only for calendar year events, with the first event of the calendar year set as the first date. For this reason there are no data points for 1987 and 1988, which had zero events and only one event, respectively. 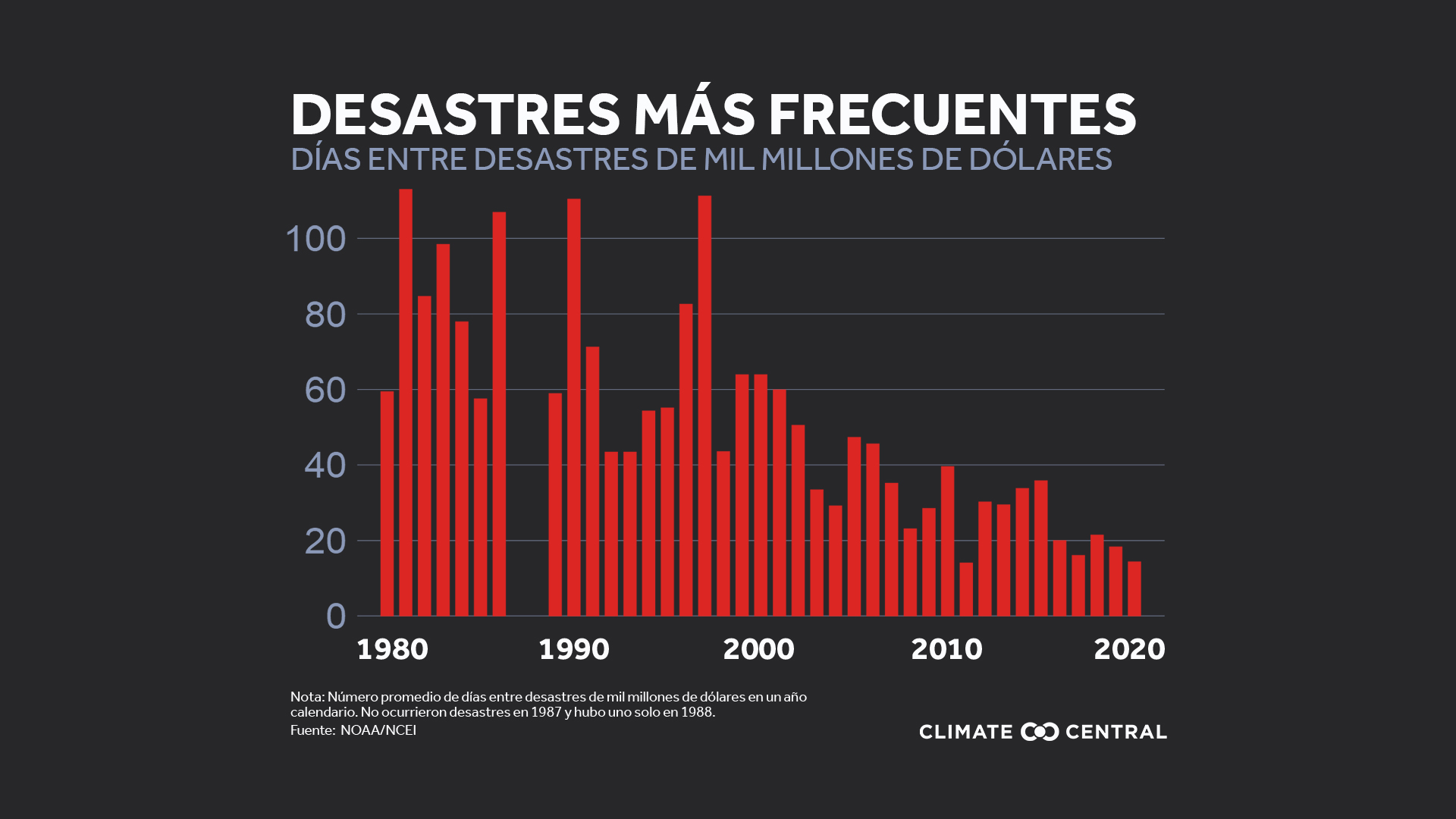 Next Tuesday, June 1st, marks the start of the Atlantic hurricane season. Read on to see the state of the science on the impacts of climate change on hurricanes.

While we’d like to leave 2020 in the past, the news that last year was the 5th warmest on record for the U.S. reminds us that climate change impacts will only worsen until we make progress on ‘bending the curve’ of CO2 emissions. 22 billion-dollar disasters hit the U.S. this year - a new record.

Increasingly frequent and severe extreme weather events are setting new records when it comes to disasters that cause at least $1 billion in damage. We gathered a panel of experts to discuss 2020's disasters and their impacts on vulnerable communities.