Coldest Days Are Not as Cold

Frigid air from the Arctic has descended on the lower 48 states this week, bringing the coldest air of the season. But as greenhouse gas emissions continue to drive climate change, cold extremes are just not as cold as they used to be across the country. 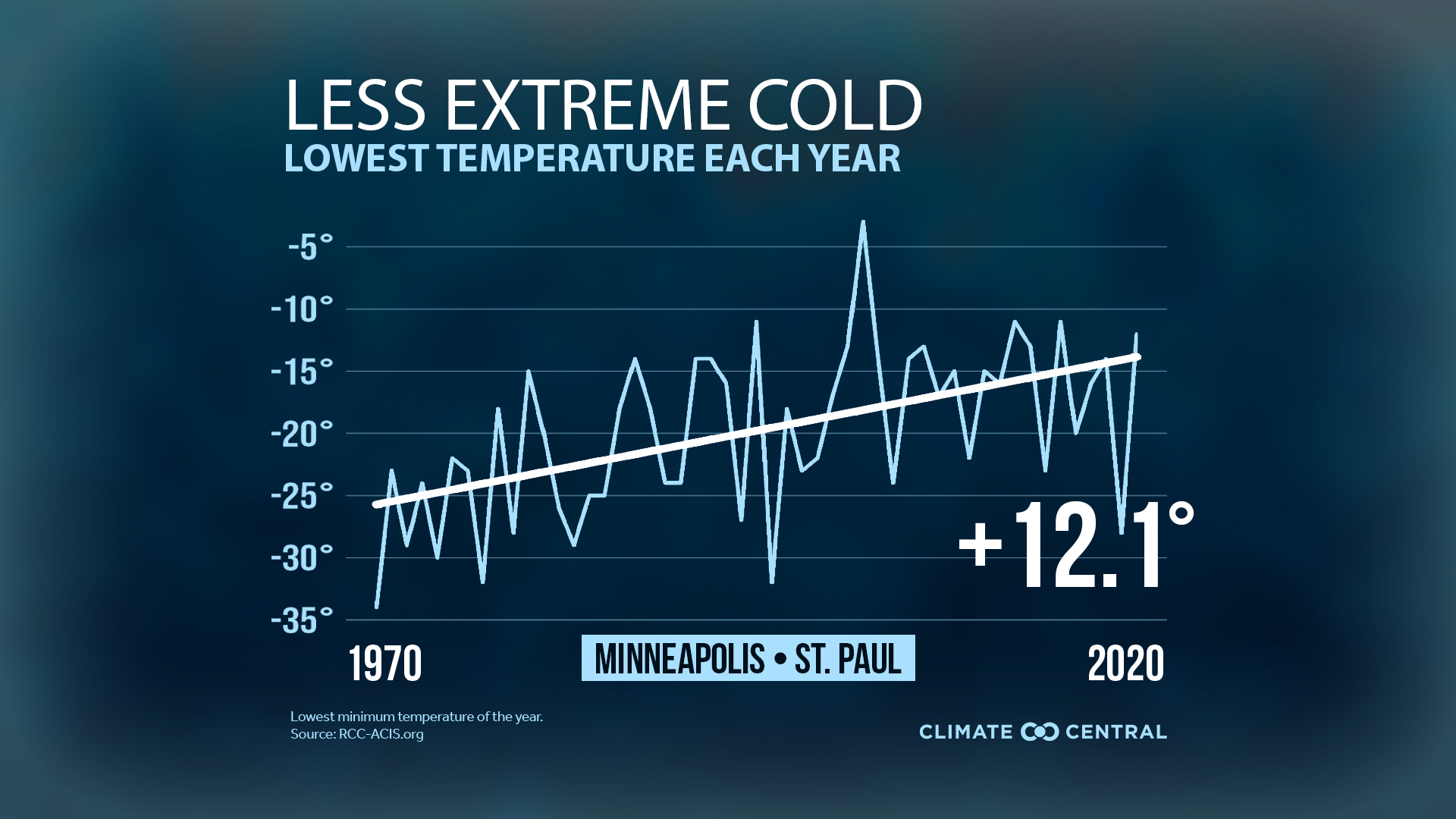 The polar vortex is once again causing many of us to reach for long underwear and heavy sweaters. But because the Arctic is warming nearly three times faster than the rest of the planet, the Arctic air advancing into the U.S. isn't as cold as it used to be.

Climate Central looked at the annual lowest temperatures at 244 locations across the U.S and found that 98% have recorded a rise of at least 1°F in their yearly coldest temperature since 1970. Just 2% experienced a decrease of at least 1°F. The average trend across these cities is a 7°F rise, and 42 cities have recorded an increase of 10°F or more. And the warming trend is happening in cities across the country: Boise, Idaho (16°F), Albany, N.Y. (14°F), Minneapolis (12°F), Nashville, Tenn. (14°F), and Anchorage, Alaska (12°F).

Not every outbreak of bitter cold can be attributed to the polar vortex. First, the polar vortex is always present, strengthening in the cold months. It is a fundamental feature of the atmosphere, a fast moving current of air encircling the Arctic that forms because of the increased temperature difference between the dark, frigid Arctic air and milder air away from the poles. There are actually two vortices, one in the layer of the upper atmosphere known as the stratosphere and one in the lower section, where our weather happens, called the troposphere. These two features interact with each other and can affect the weather outside of the Arctic. When the tropospheric polar vortex buckles or expands, and the jet stream slides to the south, it brings cold air with it. And we all need extra blankets.

Less extreme cold may sound great to those of us who don’t like the cold. But the warmer winters we have been experiencing impact other seasons. Shorter winters can make fall last longer and spring start earlier meaning longer allergy seasons and extended seasons for ticks and mosquitoes. And of course, warmer winters threaten ice fishing, skiing, pond hockey, and other outdoor recreation.

Are you prepared for extremely cold weather?
Here are some tips from the National Weather Service to protect yourself and those around you in bitter temperatures, and how to understand a wind chill. Don’t forget to look out for your pets, as well.

What’s the snow forecast in your area?
The National Weather Service (NWS) has a Winter Weather Desk, which provides twice-daily updated forecasts for snow, freezing rain, and other wintry conditions around the country. You can find local information from your nearby NWS office here, and you can also see snow reports at specific ski resorts here.

Is winter warming making pests worse in your area?
Winter is the fastest-warming season for most of the country — mostly the eastern United States. The CDC provides information on the presence of health threats from mosquitoes, ticks and vector-borne diseases in the U.S, as well as press kits for mosquitoes and ticks, including experts to contact.

The SciLine service, 500 Women Scientists or the press offices of local universities may be able to connect you with local scientists who have expertise on warming winters in your area. The American Association of State Climatologists is a professional scientific organization composed of all 50 state climatologists.

Annual minimum temperature trends from 1970 to 2020 were calculated using data from the Applied Climate Information System. Displayed trend lines are based on a mathematical linear regression. 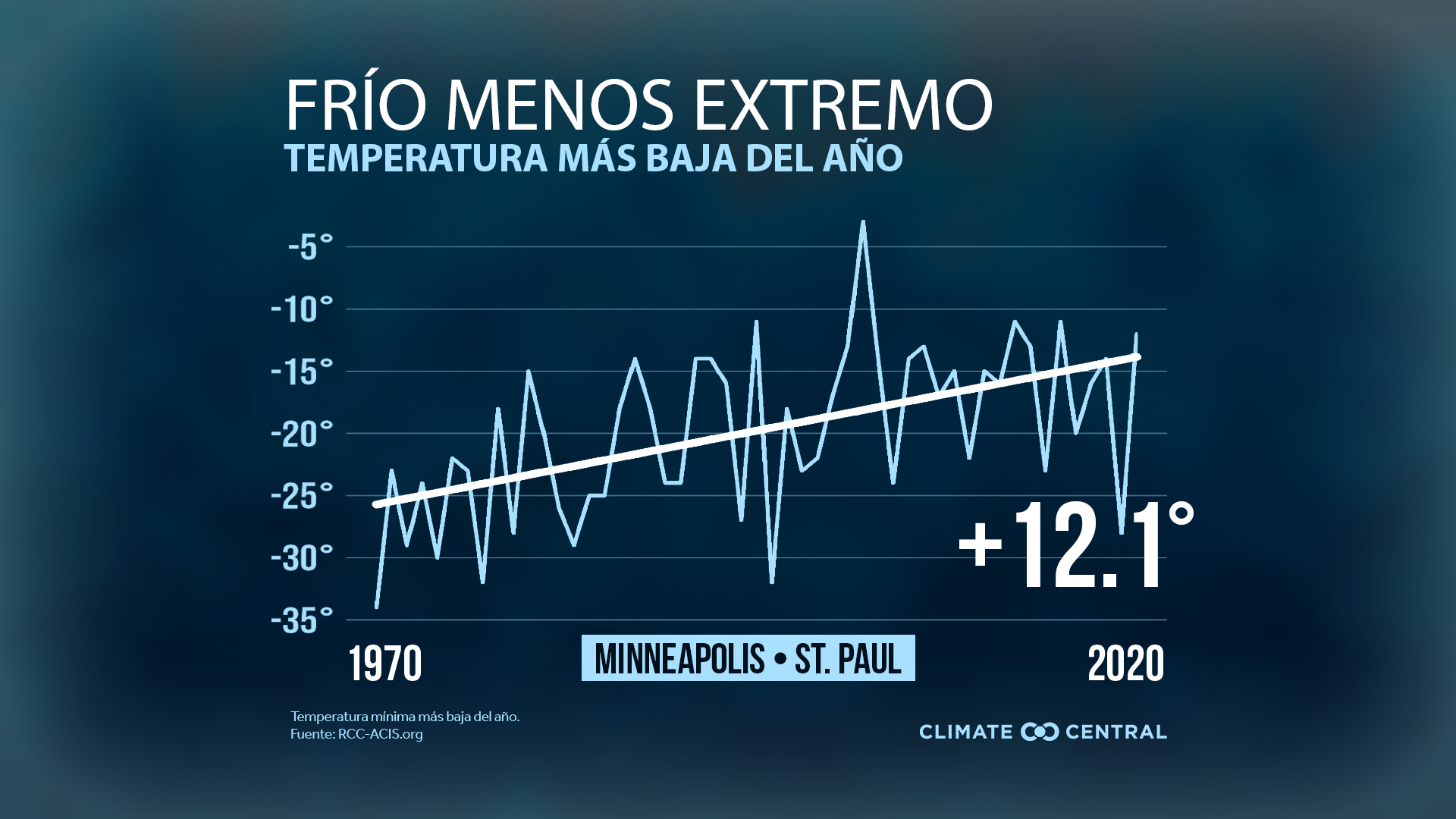 Although cold weather still exists in a warming climate, the winter season has warmed across most of the U.S. since 1970—which has negative consequences.

Climate Central prepares for Groundhog Day and finds that the number of cold nights each year is declining for most of the country.

After the hottest decade on record, it’s clear that all seasons are feeling the warming effects of climate change. Winter cold snaps have been getting shorter across the U.S.